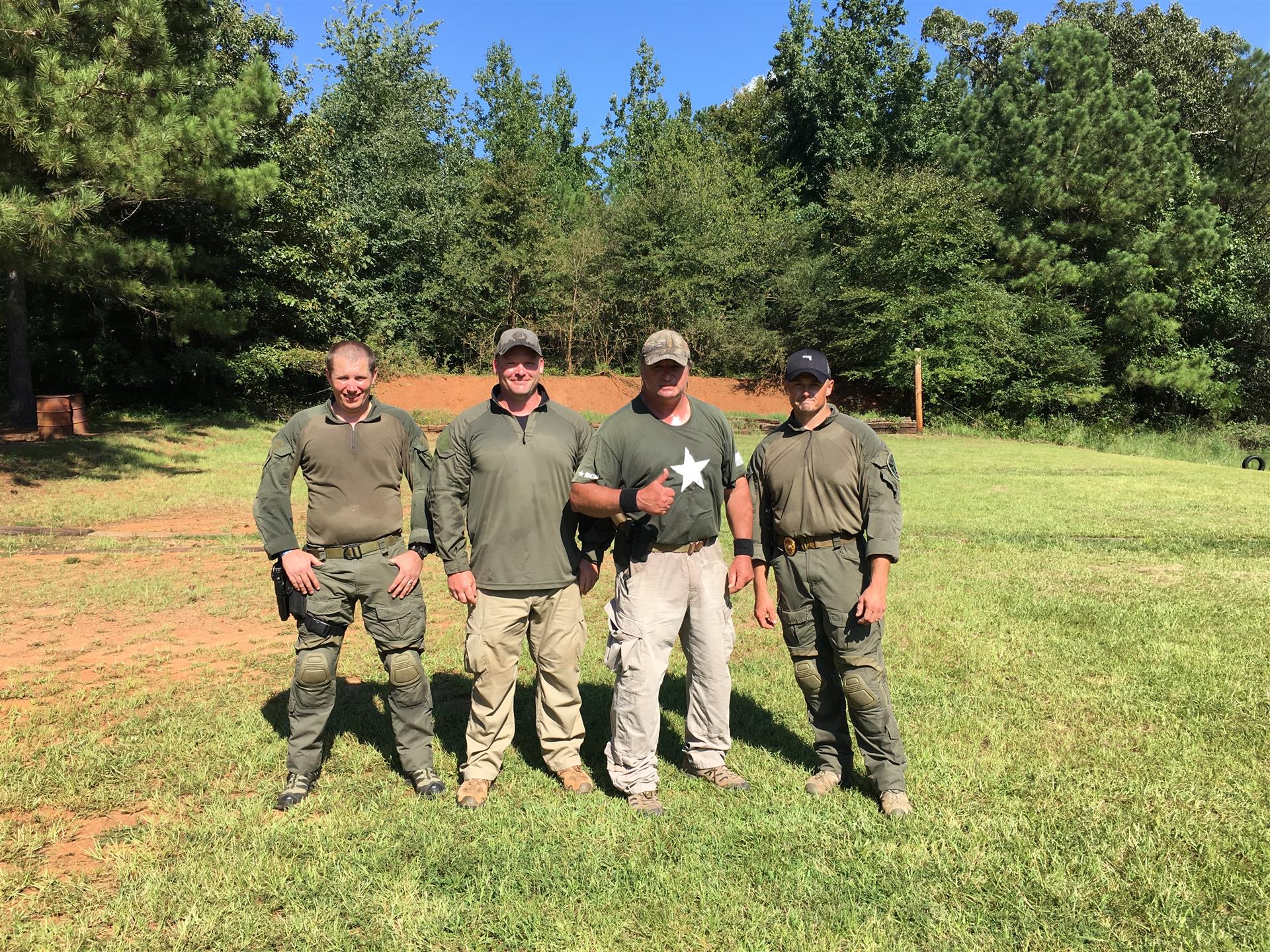 "Everything matters and everything is important. It's up to you to decide the who, what, when, where, and why of this." - Super Dave Harrington

On September 2nd through 4th, nine of us signed on to train with Super Dave Harrington of Combat Speed, LLC. If you don't know who Dave is, Google him. His list of accomplishments is long and storied. He also actually has the distinction of having literally written the book on shooting, or at least the original working SOP for Range 37 - D/2/1 at the John F. Kennedy Special Warfare School at Fort Bragg, North Carolina. That seems pretty close. I'd trained with Dave before in Americus, Georgia for his Combat Speed Pistol program. Having thoroughly enjoyed myself during that course, I approached Dave about putting on a class in the Watkinsville area.

Dave is pretty easy to speak with over the phone, and is invested in making the course as professional as possible. We discussed the goals for the class, I sent range dimensions and pictures, and we arrived at his Integrated Weapon Systems course as the subject for instruction. More than any instructor I've worked with, Dave set out to tailor the class with specific training points with the range boundaries and resources in mind. Due to the fact that most people attending the class were instructors at their law enforcement agencies or had training companies on the side, the course eventually turned into an instructor development workshop. When you work with Dave, his interest in helping his students succeed is obvious. He'll take you as far as you can go in the time he has, and doesn't ever seem to be satisfied with the gig for lack of getting more information out there. He even offered to write an information brief for my agency to inform the firearms training program.

The class began with a discussion on instructor mindset and teaching theory. Dave has done a great deal of research and had the opportunity to verify and refine his technique through years of teaching gunfighters. Instructor mindset was a theme that he spoke to at length, including the need for the instructor to lead by example and be consistent in all types of verbal and nonverbal communication. Following that, we moved on through his Principles of Marksmanship and discussed range etiquette.

Dave runs a hot range, which for many in the law enforcement and civilian training world is anathema. Students in his class are "free to handle weapons in any manner you choose, as long as you do the right thing, at the right time, every time." It's a big boy / big girl rule set that requires each person attending the course be switched on and aware of their surroundings. That would set the stage for some of the more involved shooting exercises throughout the class, including his modification of the Hackathorn Snake drill towards the end of the class.

In spite of the time spend on lecture, we did a high volume range day. It was mainly due to the fact that day one ran from 7:00 AM through about 11:00 PM. Dave trains to a standard, not a watch. He doesn't wear one and doesn't care what time it is. You're getting the content or you're not. If you're not getting it, he'll press on until he's covered what he intends to impart to the student.

The range exercises on Day 1 were focused on pistol only, and we shot everywhere from 3 yards to 25 yards. We focused on the relative zero of the pistols and ensured that we could deliver accurate fire. From there, we drove on and began progressively more difficult shooting exercises with both our dominant and support hands. Following a break for dinner, we came back and put in time doing low light shooting with emphasis placed on both speed and accuracy. Every round is evaluated. If you're not making your hits, it's noticed and discussed. Missing isn't an option.

Day 2 started at 9:00 AM, following some rest after the first 16 hour day. Day 2 saw the rifles being incorporated into the mix. Dave struck home his point on the Accuracy equation by giving everyone the simple problem of confirming zero. Since he was speaking to instructors, he explained how elaborate setting a zero could actually become if you were trying to completely remove the student from the equation and evaluating the mechanical accuracy of the weapon and the accuracy of the ammunition. Target height, immobilizing the firearm, checking the ammunition, etc. could become a very elaborate process for an instructor and merited thought for those of us training the next generation of shooters. After 20 minutes or so, he let us off the hook once his point was made and allowed us to do a quick zero confirmation. Most of us were on point, but a few people needed to get their gear in order, which ate up some training time. This was also a concept we touched on in terms of class administration and management: Dave hates wasting training time. When you train with him, you shoot, reload, rehydrate, and get back in gear. He'll often point out areas of instruction and simple range setup issues that cause a lack of flow to the training. Things as simple as not staging extra ammo and hydration closer to the line to prevent additional walking time can add up to hours lost over a three day class. Dave's range setup was incredibly precise. Everything was measured specifically, not paced or eye-balled.

From the morning portion, we began working on increasingly complex shooting exercises. From individual exercises focusing on accuracy at various ranges to ensure we knew our zero / offset, we progressed to shooting evaluations where we crossed past each other laterally across live firing lines. Again, students needed to be aware of their environment, their muzzle direction, their ammunition count, their gear setup, and dozens of other things. Everything was important, and everything mattered. By the time dinner time came around, we were happy for the break. After dinner, we progressed to low light rifle exercises, to include using the lights on rifles / pistols to illuminate the target for the other weapon system in the event of lack of ammo or a terminal malfunction. Class that day went until 10:00 PM.

Day 3 began again at 9:00 AM. We moved back into the pace set the prior day. Building on the exercises from the first two days, most of the shooting was dynamic in nature. However, Dave always brought the content back to accuracy over everything else. I've heard Dave explain his training methodology a few times now, and it always begins and ends with accuracy as the ultimate standard. Begin with accuracy and exercises designed to highlight that. Move on to dynamic and fast-paced shooting to build speed, gain confidence, and refine skills. End with exercises to focus on accuracy and reinforce the importance of hitting what you're aiming at. Even though it was obvious that Dave was tired from more than 9 straight days of instruction and shooting, he never let it slow him down. He was intense, intent, and driven to get the content out there.

"When communication fails, the only thing that works is violence." Dave Harrington is aware more than most that his training, at its core, is about killing other people with firearms. While his demeanor and intensity can be unnerving and even off-putting for some, it's not for show. He's trained countless soldiers to go overseas to fight and die, and the magnitude of that task is readily apparent in every moment he spends on the range. Having spent a few days with him, and speaking with him away from the range, he's a funny dude with whom I enjoyed a cup of Kopi Lewak ("cat shit coffee") one morning prior to the first pistol course. He's got a wry sense of humor verging on sarcasm, made more interesting by the fact that it takes a while to realize he's actually joking about some things. At one point, while we were discussing the course, he asked about a helicopter to do some dynamic shooting. I'm pretty sure he was kidding about that, but you're never sure.

All in all, I put about 1,200-1,500 rounds of both pistol and rifle down range during the three day, 34 hour course. At the end, I'd shot some exercises that most POST instructors would immediately deem unsafe and unfit for a training environment, but which were similar to exercises I'd done during my first day of SWAT school and every subsequent SWAT practice. For example, I had people shooting past me as they worked through shooting evaluations. I heard bullets pass by as I was technically down range, but didn't care so much because I trusted the people with whom I was training. There comes a time when you need to admit that training someone to shoot other people is inherently unsafe, and just trust in your brothers and sisters to make the right choices and not shoot you.

At the end of the course, I came away with another challenge coin from Combat Speed, LLC and another picture of myself with Dave Harrington and a bunch of great dudes who attended the training with me. More than that, I came away with a stack of notes and some great insights into the training philosophy of Dave Harrington. The course cost $500.00 per student and covered more than 34 hours of instruction. It's the best deal going in the industry, and should easily be double what Dave charges.

I'm looking forward to seeing Dave again in the future. I'd like to make training with him a yearly endeavor at the very least.