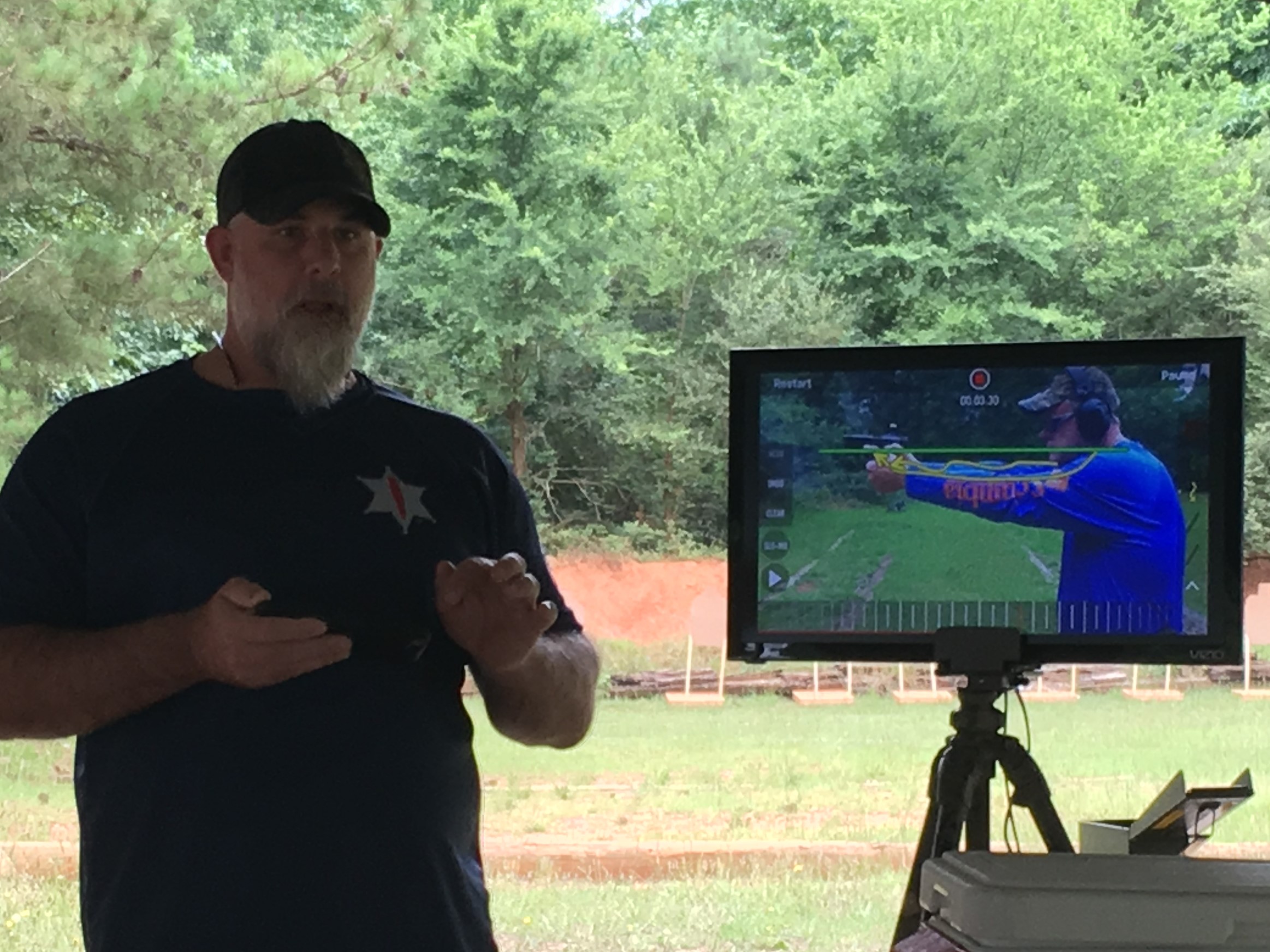 It’s been a few months since I attended the Sheriff of Baghdad video diagnostic Pistol and Rifle courses.  I’ve used this time to evaluate what I learned.  When I attend a class, I’m evaluating the training from the viewpoints of a student as well as an instructor.  I focus on improving my skill set as a shooter, but I also look for teaching methods or tools that will allow me make my own instruction more effective.

I knew almost nothing about John “Shrek” McPhee prior to attending this class.  Shane Gosa had booked him, and I’ve come to trust his judgment on instructors.  I knew that John used the Coach’s Eye software to a video review of each shooter’s technique.  That intrigued me, because I’ve never attended a course that used video or photography in that way.  A search of student AARs for John’s courses generally made a statement to the effect that I would fire “the best four rounds of your life.”  Andrew Still accompanied me to the classes, so we had most of the Sparrow Defense staff on hand.

The class started at 8 AM.  John was there early in order to set up the electrical equipment necessary for the course.  We began with a simple exercise: Draw the firearm, fire two rounds center mass at a target, reload from slide-lock, and fire two more rounds.  Each student performed that drill while John used his phone to video the drill.  Once each of the students had completed that drill, we moved to the covered shelter for the video diagnostics.

John broke the raw video footage into four different areas: Stance, Grip, Presentation, and Reload.  Each of those subject areas was discussed in a separate video.  Using the software package, John would narrate his comments while drawing lines in red, yellow, and green to show what was being done correctly and what was being done improperly.  The software allowed him to slow down to frame-by-frame progression to show the path of the gun.  He could also run a timer to show shot delays and split times, the amount of time wasted through extraneous movement, and plot a path that would shave off fractions of seconds.  The video review took approximately 30 minutes per student.  Each student came away from the course with five videos that they could download and review in the future.  I’ve watched mine many times since, incorporating them into dry fire exercises at home.  I’ve also taken some of his views on form and plugged them into the lessons I provide to new shooters.

As a student, I found the video review very helpful.  It’s one thing to tell a student that their stance is improper. It’s another to show them an outside view, draw on it, and show them HOW it is improper.  In my case, I found that I was standing up much straighter than I had initially believed.  I was also able to see the progression of the recoil as it traveled down my arms into my shoulders and core.  The video was detailed enough that I could see the progression of the muscles in my forearms and triceps move with the recoil impulse.  I saw my muzzle rise, saw where my eyes were looking at the sight, and saw where my wrists were not locked out.  I saw how I needed to refine my reload to clean it up, and how I was losing time on the sights by not bringing the gun up in front of my eyes fast enough. It was an awesome and eye-opening experience.  All of that came from a 7 second video segment taken during a shoot two, reload, shoot two drill.

John’s segments were well-rehearsed because he moved through the process fluidly.  Each student received a review specific to their shooting style.  While I found great benefit as a shooter from the review of my own form, I learned just as much from watching the video reviews of the other students.  Everyone at the course was a seasoned shooter with hundreds or thousands of hours behind the gun.  Each one of us took something of value from the course.

As an instructor, I took more than twenty pages of notes on how John reviewed the video and progressed through the different focus areas.  I immediately began thinking of how his model could be plugged into agency firearm training.  During a break, I asked him if he did work with law enforcement and told me that he consulted with several metropolitan agencies on building a student video database.  It’s time-intensive, but departments with a full-time training staff could easily rotate students through a video diagnostic review.  In the course of an hour, an officer could perform the entire process from start to finish.  After the diagnostics, dry fire exercises and/or a 50 round box of ammo could refine that officer’s shooting techniques and model ways to improve on their off time.  In a time when budgets are being tightened, John’s process was highly effective in terms of cost vs. gain.

Following the video review of each student, we moved onto the range and performed shooting exercises that focused on the changes that John had made to our technique.  It was a low round count day; I shot less than 250 rounds during the entire 8 hours. Many of the shooting exercises were performed individually, with John providing 1-1 instruction while the rest of the class watched.  While it caused each student to have down-time, each round was scrutinized.  We were looking for perfect practice to retrain muscle memory, not a high round count.  While some of the range exercises seemed almost remedial, I found that I focused on making every shot count and paid more attention to my shooting process than normal.  John would generally stop each shooter mid exercise to correct form issues.  He’d tweak your stance, rotate your support hand, roll the shoulders up, or bring make some other small adjustment.  By the end of the day I had soreness in my legs, back, and arms from maintaining such a strict form.

John broke down the range at 5 PM.  It was a true 8 hour day and not a second longer.  Following the end of class, we gave feedback on the course.  Many of the students, myself included, expressed that we would have enjoyed an “out video”, showing how our form had changed throughout the day.  John stated that he’s still attempting to work out how to do that within the confines of a one day class, and that the out video was the most common request he received from students.

The following day, I attended the Rifle Diagnostics course.  That course followed the same progression as the pistol, working on the same four fundamentals: Stance, Grip, Presentation, Reload.  I again saw problems with my form that would be impossible to detect with the naked eye.  I came away from that course with 5 videos that I also continue to watch when I perform dry fire.

In conclusion, I’m glad that I had the opportunity to train with John.  While his courses aren’t cheap ($375 per day), I ultimately found the experience to be worthwhile.  As I wrote earlier, every shooter attending was operating at a high level of efficiency and had a great deal of time behind the gun.  For shooters looking to go beyond the 90-95% and shave off fractions of a second, this would be money well spent.  The micro-changes in form and technique that I’ve made were things that I believed I was doing properly until I saw my videos.  It took an outside view to see how I was losing time and making mistakes.

John has recently made a change to his booking policy and capped his courses at 8 students.  I appreciate the commitment to personalized instruction on his part.  There’s nothing worse than paying $500.00 to split your time standing should to shoulder with 26 other shooters.  John will be coming to Athens, GA in March of 2016 for his one-day video diagnostic courses on the pistol and rifle.  I intend to take the pistol course with my Veil Solutions appendix rig this time, rather than the strong side hip holster that I used in the first class.  It’s my way of getting an “out video” and seeing how I’ve progressed since the first class.