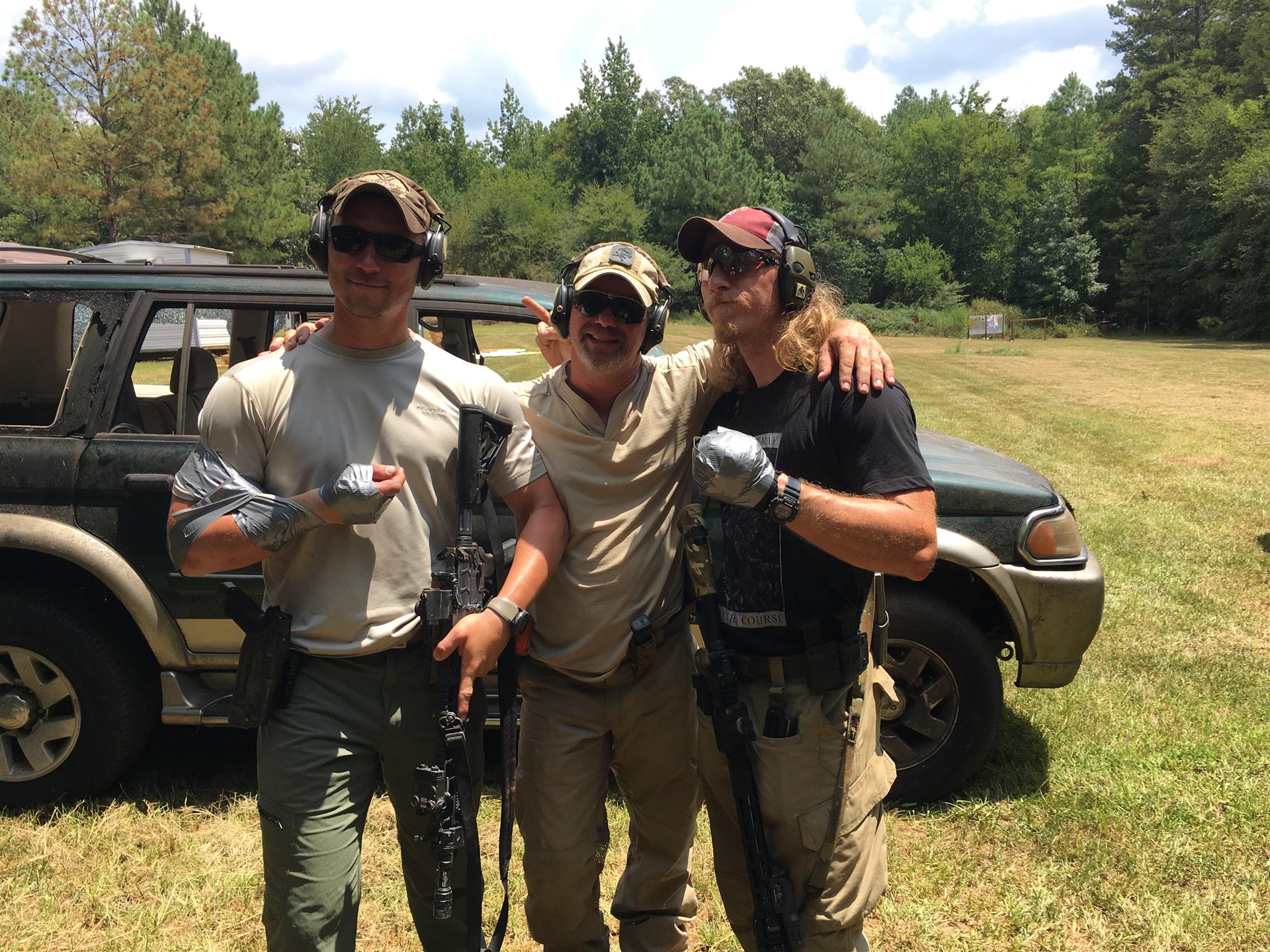 In August, we were happy to have Chase Jenkins / Talon Defense back for a second Gunfighter course. Having taken the course as a student, I helped to instruct this time around to get some local law enforcement students through the class. Chase is a high-energy instructor with a well-rehearsed program. I was eager to understand how his teaching process had shaped my experiences as a student.

As with the first course, we spent the first day working on weapon manipulations and finding benchmarks for student performance under stress. Chase's range safety briefing departs from the normal "Four Rules" talks and focuses on applying those rules to a combat mindset. In his words, the training area is not a safe environment. The shooter needs to be safe by staying on task and manipulating their weapon in such a way that no one is swept with a muzzle. Many of the drills require two shooters to work in close proximity to each other, often at different heights, or moving behind or in front of each other during live fire exercises. Muzzle direction is dictated by the location of the other shooter and the staff on the range. The exercises during Day 1 highlighted the importance of mindset and keeping on task. "You can be safe, or you can spectate" was the rule of the day.

As an added bonus, William Petty of 88 Tactical was attending the course as a student. Will is an excellent instructor in his own right and teaches a variety of courses that complement Chase's classes. The banter between Will and Chase was entertaining, and focused on who stole whose program (among other things). Will was roped into doing the ballistics demonstration, and explained the physics of bullets striking vehicles in language simple enough for everyone to understand. Will's research on the subject has informed his program, and he has a statistical and scientific basis for telling you to do certain things around a vehicle. To highlight one of his points, he put 97 rounds of .223 ball ammunition into the B-pillar of a vehicle, with no rounds penetrating to the other side to strike the target hung there. I found that material interesting and easy to apply, as the simple version of the two hour talk is "get as many pillars or points of cover between you and the bad guy as possible."

Day 2 was all about vehicle work. Students performed alone or in pairs to engage targets from within or around vehicles. The drills were conducted multiple times, with increasing layers of complexity folded in. Short runs exposed the students to the necessary skills and movement required to engage the targets properly. Once they were comfortable, the longer drills pushed the students to the point of exhaustion to see where their physical and mental limits were. The training methodology highlighted the importance of thinking clearly and calmly, regardless of physical fatigue. From the outside, looking into the scenarios as an instructor, I found that there was an amazing amount of information to keep up with in terms of personnel on the range, adding complexity by inducing weapon malfunctions, and staying ahead of the student to call out the next target or vehicle position. As an instructor, you need to be aware of EVERTHING that is happening at a given moment, which is a very tall order. The course is much easier to attend as a student.

It was a pleasure to watch Chris Woomer of Veil Solutions team up with Will Petty to take on Will's "Alphabet Soup" exercise, where students engage a variety of targets on the range by searching for them from various cover points on the range. This is an intense drill in terms of movement, rapidly transitioning between cover points, and maintaining accuracy. Will and Chris has a run that lasted approximately 12 minutes, and at the end of all that there were a combined 4 rounds in the targets that were out of the A zone of the IPSC target. To make it more impressive, they managed to joke and taunt each other the entire time they were running the exercise, whereas most people were laboring for breath. Those two are at the top of their game, and their performance showed that.

Day 3 saw us doing more work around the vehicles. The shooting got further away as the day went on, and we ran to the end of the range to shoot at about 80 yards. Students were required to use pistols and rifles to engage targets at this distance, and most did very well at that range. With the focus on getting good cover positions, students had enough time to deliver good hits to the reduced size steel targets down range. The drills were partner-oriented again, and reinforced the importance of safe muzzle direction, situational awareness, and finding the priority of all the tasks to complete.

Having taken the class as both a student and instructor, I've got to say that the Gunfighter program is excellent in terms of getting students out of their comfort zone. It is a course that requires a high level of individual skill. Students need to be operating the guns at a nearly unconscious level to succeed when the fatigue kicks in. During the two courses I've hosted, I've witnessed three students with solid skill sets throw in the towel on Day 1. If you're willing to leave your ego at the door, Chase will highlight some areas for improvement.

A big thanks to Chase for letting me assist him and getting some of my local cops through. Thanks also to the students who attended, Will Petty for the awesome ballistics demo and constant humor, and Chris Woomer / Veil Solutions for making most of the kit I wore on the range.