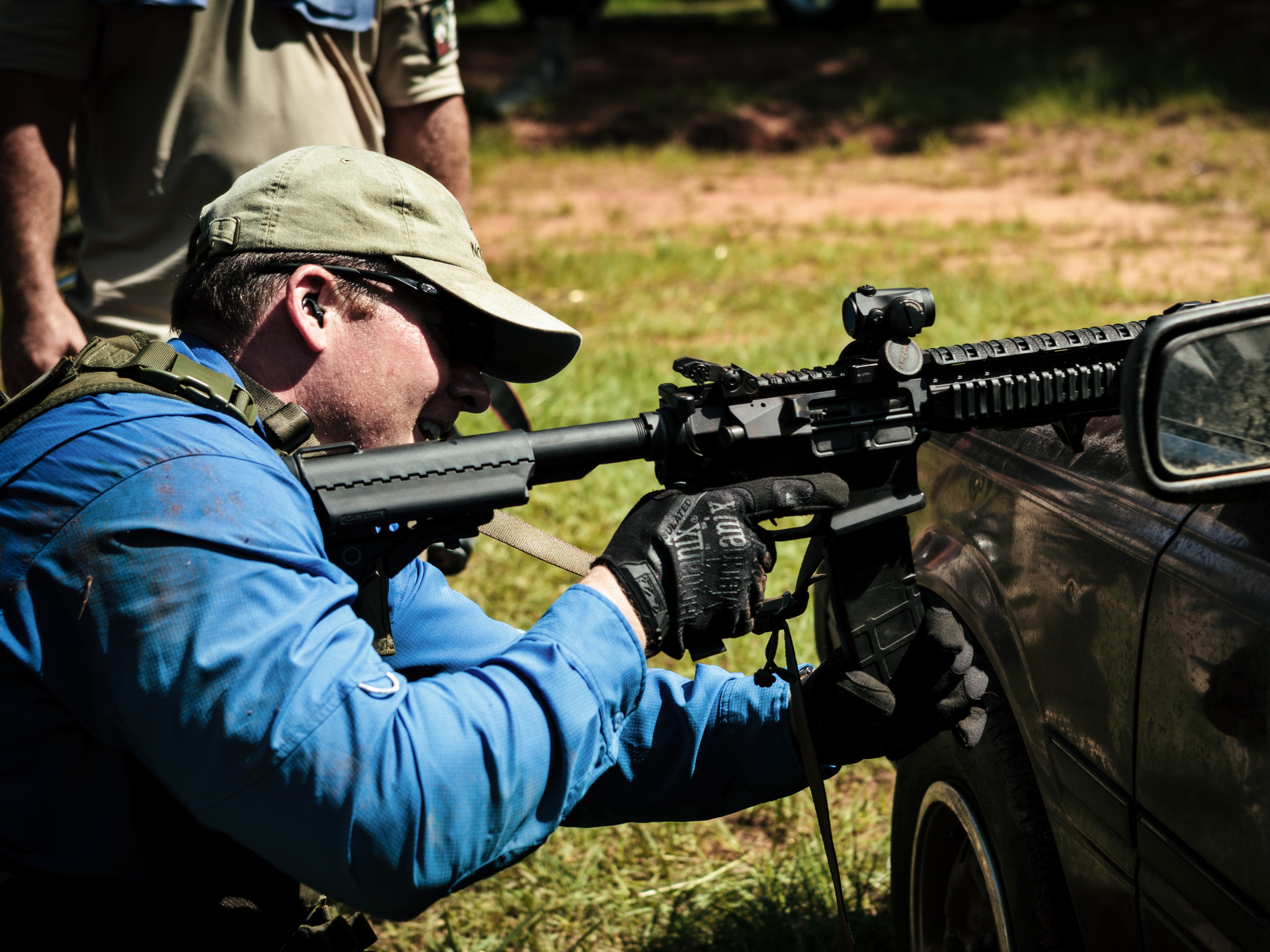 It's taken me almost a month to get this AAR up on the Vehicle Gunfighter course I hosted in June. I had never trained with Chase Jenkins prior to this course, but a number of friends and co-workers had. I had the following information available when I began talking with Chase about coming to Watkinsville:

That was a ringing endorsement from some people I respect in the shooting community. I also took the time to listen to an hour-long interview that Chase gave on Ballistic Radio, during which he talked about his training philosophy and how he came to develop the Gunfighter course. If you know me, you'll know I'm not a podcast kind of guy, but I managed to make it through the entire thing and it confirmed that this would be a great opportunity to add to my toolbox.

The course was three days in length (Friday - Sunday) and it was mid-June in Georgia. Chase requires students in this class to have a solid skill set prior to being admitted. As such, the shooters were vetted by other instructors, through their respective law enforcement agencies, or from past training with Chase. We had approximately a 50/50 mixture of civilian and law enforcement (local, state, and Federal) students on the line. There was a huge variety of gear. The required ammunition for the course was 1000 rounds of rifle and 400 rounds of pistol.

Day 1: Flat Range
Day 1 began with a safety briefing that was very candid and left nothing unclear: This stuff isn't safe. Inherently, there is a danger in any dynamic training. The options are to make the range so safe that the training becomes useless, or to require that the shooter be responsible for eliminating the risk. "You can be safe, or you can be a spectator" as Chase said. We discussed the "Trifecta of Engagement" at that time. When the threat, sights, and eyes aren't in alignment, the trigger finger needed to be straight and away from the bang switch. Combining that with a constant awareness of muzzle direction kept anyone from getting hurt. When moving rearward or between positions of cover, there wasn't any competition-style silliness of pointing a weapon at the berm at all times. If you were moving rearward, you MOVED rearward. That meant muzzle down, safety on, and sprinting. There was no meandering down the range with your pistol pointed backwards over your shoulder in a "safe" direction like I see every time I go to an IDPA match. It was realistic, and it was tactically sound.

For the rest of the day, we worked with our pistols and rifles on the flat range, which was shooting on the line in relays. We covered positional shooting, during which time I was introduced to the concept of pinning myself to the ground for a stable stance while on my back. We shot our way from multiple prone positions, discussed how different positions not typically taught in a basic class (roll-over prone, squatting, etc.) became highly effective when using a vehicle for cover, and how the rifle or pistol needed to be positioned depending on how we were using the vehicle for cover. To make matters worse, Chase has an instrument called the Paw that he uses to induce weapon malfunctions on rifles and pistols. He can create a stovepipe or double-feed, drop the magazine out of your rifle, and generally break your gear whenever he wants using just that metal dowel rod with a piece angle iron welded onto it. The flat range was made more stressful and sweaty as you were generally jogging or drilling the positions while you waited for your turn to shoot. This was where I began to develop some decent bruises, and where people began to see where their equipment worked or didn't. Holsters broke, magazines fell free during movement, optics went down. It was a great shake-out for the gear.

First thing up was a ballistics demonstration to show what bullets do when they hit cars. Lesson learned: You can't ever count on it to do something reliably. Some rounds stopped in a single door panel. Some rounds tore through the entire car. Shotgun slugs stopped in the vehicle posts. Frangible ammunition punched through like barrier rounds. While it proved that there is no guarantee that what you're using on the vehicle will stop a bullet, it did give us a better understanding of what might be better if you find yourself taking fire.

From there students moved onto the dynamic exercises for the day. We started with the pistols, engaging targets through the windshield at near distances. We then bailed out of the vehicle and worked cover at the rear of the vehicle, moving between targets that were set on the ground or over the hood, requiring you to get into prone and kneeling positions to put hits on target. These were done from the driver and passenger sides and you worked with a partner. Trigger and muzzle discipline were imperative. Next up was a similar drill at longer distances. Students began by drawing pistols from a seated position in the vehicle, engaged targets down range, bailed out to the rear of the vehicle, and began using rifles. We moved from prone, squatting, kneeling, standing, changed sides of the vehicle across your partner, and even moved between two vehicles roughly ten yards apart. Throughout all of that, the Paw as constantly jamming guns, releasing magazines, and generally pissing people off. My own personal experience with the Paw is still scarred pretty deeply into my psyche at this point. When I messed something up (which was often), I would hear someone say "You must pay a penance" and then something would go wrong with my weapon. If I fixed it without following the proper steps, it happened again immediately. That type of training forced you to maintain your cool in a very dynamic shooting situation, while being yelled at by Chase (whom I did wish to hurt by then), and follow the steps that we'd practiced the day before. That took us up to lunch.

After lunch, we worked longer range shooting (approximately 85 yards) around the exterior of vehicles. I learned the "junkyard prone" position, which is accomplished by laying the rifle on its side and shooting from a more covered position that if you brace the rifle on top of cover in the traditional manner. As with everything else, there was a high degree of movement as students moved through roughly 12 pre-marked shooting positions across two vehicles, attempting hits on steel targets downrange.

Day 3: Putting it all together
By Day 3, almost every student had purchased a Frogg Togg to keep them cool. It was hot. Day 3 involved only two evaluations / exercises that put all the skills covered during class together. Both of these exercises were conducted one shooter at a time, so we stacked our rifles on a cross-tie and waited in the queue under some shade.

The first exercise was a close quarters engagement from a seated position within a vehicle. You drew the pistol while seated, engaged targets behind and in front of the vehicle through the glass, rolled out onto the ground to shoot under the vehicle, then retrieved your rifle after scanning your surroundings. Once you had your rifle, it was a 40 yard sprint to another vehicle, at which point you were constantly moving between pre-marked positions on the car to get shots on steel targets down range. I've had more fun doing Burpees. The Paw was once again making my life miserable. In addition to the movement, the shortness of breath, and the inherent stress, Chase continued to provide "feedback" on my performance. In total, the scenario took more than 6 minutes, which is a long time to be jumping up and down and crawling around a vehicle while putting fire on targets. It was definitely more intense than anything I did in SWAT school, including live fire and SIM round exercises.

The second exercise was at closer distance, but was more dynamic in nature. You again started inside the vehicle with the pistol, then bailed outside the car to use cover. Chase would give the student a number or letter. Letters were associated with a specific target that you may or may not be able to see from your current position. If you couldn't see it, you were expected to move and locate that target to engage it. Numbers were associated with positions on the vehicle from which you could engage a number of targets. If you were given a number, you moved there and put fire on what you could see. This exercise used rifle and pistol interchangeably. Your rifle might go down ($*#@*# PAW!!) and you would transition to the pistol (also not Paw-proof) until you had engaged the targets and could then fix the malfunction during a lull. That exercise took approximately 4-6 minutes per shooter.

For those students who had taken Talon Defense's Injured Shooter course in the past, they were subjected to a special treat of having parts of their body immobilized through duct tape, tennis balls, water bottles, etc. For those lucky folks, they had to work through the same scenarios with only their primary hand available, or with a limited range of motion to their support arm.

So hands down one of the best classes I've ever taken. It was fast-paced, took each shooter to the point that their skill sets were tested (and in many cases exceeded), and induced a TON of stress. Almost all of this material was new to people who hadn't taken the Gunfighter course before. I've never been to any type of law enforcement training that has been conducted in this manner or which approached a vehicle in this way. For one, agencies are too terrified of the specter of liability to allow much training of this type. Second, many trainers have a problem making their students fail. Personally, I get the most out of training that requires me to sink or swim. In an era of participation trophies, going through this course successfully actually means something.

This course is by no means for beginners or intermediate shooters. You need to have your skill sets dialed in before you come out or you will find yourself a spectator. This is not the course to fix problems with your fundamentals or to learn how to shoot while kneeling. However, if you want to stop standing in a static fashion in front of a target on a line and actually DO something, this is a great course to take.

While there was a substantial amount of down-time during the course on the second and third days, I believe that each shooter learned a great deal from the class. I am already working on getting Chase back up to Watkinsville for another Gunfighter so that I can have another crack at the scenarios.